So it’s been 25 years since the first Jurassic Park movie was released. And like the dinosaurs in the eponymous theme park, JP’s dna has been extracted and cloned time and time again. Sometimes this ends up in disaster, but sometimes… just sometimes… you get a fun adventure popcorn movie like Jurassic World: Fallen Kingdom.

At the end of the year, Fallen Kingdom isn’t going to win any awards (save maybe the technical ones), and it won’t make any ‘best of 2018’ lists, but it is a good time at the movies. It’s not too dumb, and it’s never insulting, and that may be a pretty low bar to clear but given the recent trends in summer movies, you have to take your wins where you can.

Remember the first Jurassic World (which was actually the fourth Jurassic Park)? Dinosaur cloning is perfected, and this time nobody makes the mistake of hiring Wayne Knight, so the park opens and it’s a huge success. Then a custom-designed Franken-Dino called the Indominous Rex escapes from its enclosure and everything goes ker-blooey. Claire (Bryce Dallas Howard, The Help, Spider-Man 3) and Owen (Chris Pratt, Guardians of the Galaxy, Avengers: Infinity War) were employees at the park; she’s head of operations and he’s involved in animal behavior training. Together, they team up to stop the Indominous Rex, but the damage is done to the park’s reputation and it’s shut down.

Now in Fallen Kingdom, it’s four years later. The volcano at the center of the park’s island has become active and there’s debate as to whether or not to save the dinosaurs from a second extinction or let them die. We find Claire now running a non-profit advocacy group trying to get support in Congress for action to save the endangered dinos. But since the work of non-profit advocacy groups- though important- is boring, a mysterious benefactor steps in and offers to help her rescue the animals.

This is Benjamin Lockwood (James Cromwell, Babe), and he lives with his young granddaughter, Masie, in a mansion stuffed to the rafters with dinosaur paraphernalia. He was John Hammond’s secret partner many years ago before they had a falling out (Hammond, you may remember, was the man behind the first Jurassic Park, and played by Richard Attenborough). Lockwood wants to keep Hammond’s dream alive, and wants Claire to help move the dinos off the island and onto a new, privately owned sanctuary.

Claire goes to recruit Owen, and he’s reluctant, but eventually agrees to go along to help find and rescue Blue, the raptor with whom he shares a strong bond from the first Jurassic World. So once again together, they team up- along with veterinarian Zia Rodriguez (Daniella Pineda), and IT guy Franklin Webb (Justice Smith)- to get as many dinos off the exploding volcano as they can!

And that’s just the first act of the movie! After that, the action shifts to a dino-laden tanker, and then onto a gothic mansion, where things slow down for a bit. There we meet the movie’s primary dino-antagonist: the Indo-Raptor (™). This guy’s basically a smaller, meaner version of the Indominus Rex, and he’s been designed, bred and conditioned to hone in on specific targets and ruin their day. The I-Raptor and other rescued animals are put up for auction to various shady pharmaceutical, military and chemical concerns. Together, Claire, Owen, Maisie and the rest of the gang have to team up to stop the auction, defeat the I-Raptor and figure out what to do with a veritable zoo of de-extincted animals.

The effects, both practical and digital look fantastic

Director J. A. Bayona (The Orphanage, The Impossible) loves keeping the dinosaurs hidden in darkness, only briefly illuminated by a sudden flash of lightning or spurt of glowing lava as they stalk closer to their intended prey. It’s an effective technique for building tension. When the dinos are shown clearly, the effects, both practical and digital look fantastic. Yes, there is extensive use of practical effects work- including an impressive T. Rex animatronic.

When it comes to the movie’s human characters, Pratt’s Owen Grady is still the weak link. Sure, he’s buff and tough, he can build a house with a hammer and he has a soft spot for animals… but that’s all there is to him. HIs cinematic forebear, Indiana Jones, was grouchy and vulnerable and that gave the archaeologist adventurer humanity. Owen’s not allowed any real moment of vulnerability- either physical or emotional. Nor is Pratt allowed to any of the goofball charm he brings to his other major franchise role, Star Lord. He’s pretty much just a blank slate. We root for him because Chris Pratt’s a likeable guy and his cause is just- but there’s nothing intrinsic to the character that earns our cheers.

The other new characters, Dr. Rodriguez and Franklin unfortunately disappear pretty much the moment the tanker leaves the island. Rodriguez has to get a bullet out of Blue, and Franklin does some computer work at the end- but that’s about all the story asks of them at that point. 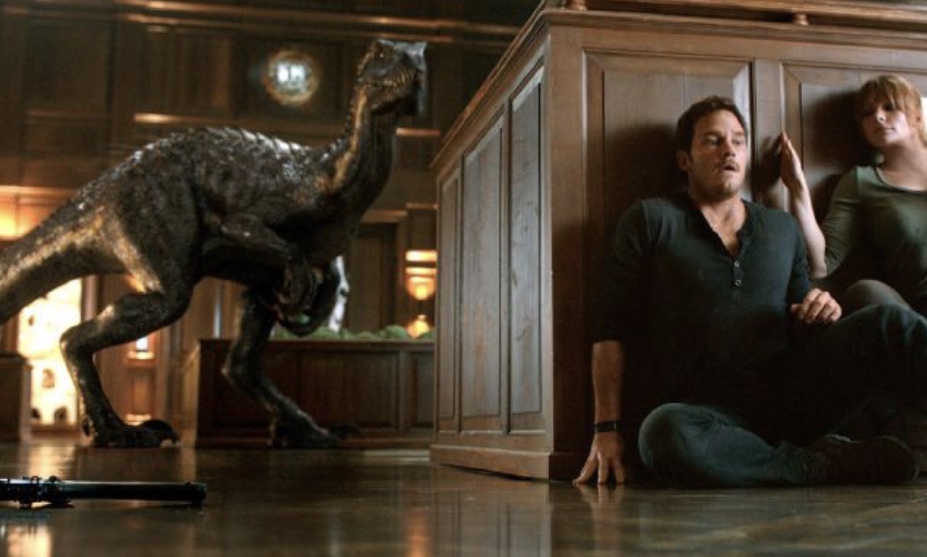 In addition to the main cast, the smaller roles are filled by a murderers row of great character actors. Rafe Spall (The Ritual) plays Eli Mills, Lockwood’s personal assistant and an old friend of Claire’s. Ted Levine (Silence of the Lambs) is the special ops guy in charge of getting the dinos off the island- and it’s Ted Levine, so you know this guy isn’t on the up-and-up. Toby Jones (Captain America: The First Avenger) shows up as an evil businessman who helps the real villain of the film with his scheme to auction the dinos off for lots of dollars. Geraldine Chaplin (who worked with directed Bayona previously in The Orphanage, The Impossible and A Monster Calls) has a small role as Masie’s caretaker. As director trademarks go, there’s a lot worse than making sure Geraldine Chaplin has a role in your film. Finally, B.D. Wong returns as the eternally put-upon Dr. Henry Wu, the man who’s cloning technology has made all this possible in the first place. I hope every Jurassic World sequel, however many they end up making, has a scene where Dr. Wu is hastily abandoning his lab, screaming about how important his work his.

If you’re going to swipe from anyone, you might as well swipe from the best.

Fallen Kingdom contains numerous, direct call-backs to Steven Spielberg’s work on the first Jurassic Park. The scene where the Indo-Raptor stalks our heroes in Lockwood’s dinosaur museum is beat-for-beat nearly identical to the kitchen scene from the first movie- right down to the way the I-Raptor taps its claws on the floor while stalking its prey. But the film series this movies seems to take the most genetic material from is Spielberg’s Indiana Jones. If the bad guys were swiping ancient religious artifacts instead of dinosaurs, Jones would not be out of place in the proceedings. All Chris Pratt needs is a fedora and a whip.

If you’re going to swipe from anyone, you might as well swipe from the best. No other director, living or dead (with the possible exception of Hitchcock) can elevate pure popcorn level entertainment the way Spielberg does. Bayona can’t come close to achieving what the first Jurassic Park does, but he still has a rollicking good adventure flick on his hands here. There’s life in this old franchise’s bones yet.