Loving Vincent is an achievement. It is an animated film that took over 7 years and 65,000 oil-painted frames of animation to bring to the big screen.  Every one of those 65,000 frames were hand-painted by a team of 125 animators, going through 6500 tubes of paint in total. The result brings Vincent Van Gogh’s paintings to jaw-dropping life while telling the story of the final weeks before his death.

Director Dorota Kobiela, an animator from Warsaw, first conceived of Loving Vincent as a short, one which she would paint and animate herself. However, when the project grew into its present form as a feature with the help of her co-writer and director Hugh Welshman, it became quickly apparent that she would need a much larger team, one that ended up being spread out over three different countries. Using footage of the actors as a reference point, the artists painted a frame on a canvas, which was then photographed with a still camera. The next frame was painted over the previous one on the same canvas, rephotographed and so on. All the photographs were then brought into a digital tool which corrected for minor changes in lighting and color temperature and then sequenced the frames into moving images. That’s a heck of a lot of work, and happily Loving Vincent is a film worthy of the effort.

The movie follows the journey of young Armand Roulin (Douglas Booth). One year after the death of Vincent Van Gogh (Robert Gulaczyk), Armand has been tasked with delivering Vincent Van Gogh’s last letter to his brother Theo (Cezary Lukaszewicz). Armand travels from Arles to Paris, where he meets Julien Tanguy (John Sessions), the man who supplied Van Gogh, and many other French artists, with paint and supplies. 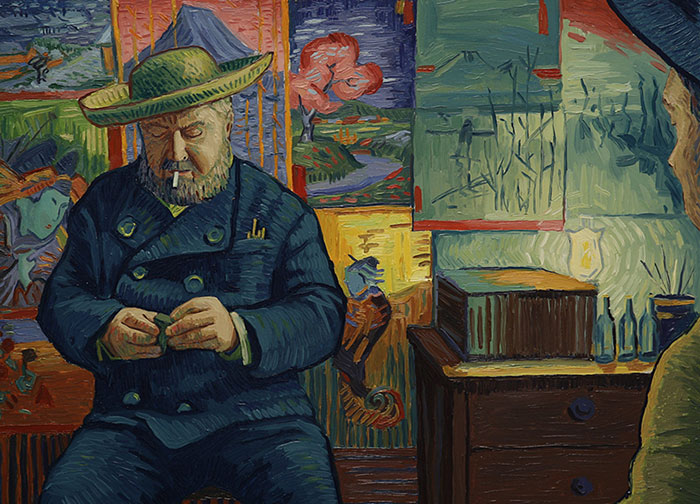 Tanguy sends the young man to Auvers-sur-Oise, a small suburb north of Paris, where Van Gogh went after his stay at Saint-Remy, an insane asylum where Van Gogh had voluntarily committed himself after severing his ear. Vincent moved to the small village to be closer to his doctor, Paul Gachet (Game of Thrones’ Jerome Flynn), who was something of an amateur painter himself, and it was there where Van Gogh would kill himself a few months later.

In Auvers-sur-Oise, Armand finds that Dr. Gachet is away and won’t be back for a few days. In the meantime, Armand begins asking around town about the strange artist who once lived there. Some, like Gachet’s housekeeper (Helen McCrory) thought Vincent was too much trouble for anyone’s good, others such as the innkeeper’s daughter, Adeline Ravoux (Eleanor Tomlinson), saw him as eccentric and driven, but extraordinarily gifted. Others around the village have their own theories.

Armand tries to make sense of the competing narratives surrounding Van Gogh, and begins to believe his death was something more than what the official reports claim. Armand begins to get sucked down into a rabbit hole of conspiracy theories and small town gossip. Did Vincent Van Gogh really kill himself, was it an accident, or could it have been murder?

Loving Vincent’s story is structured a lot like that of Citizen Kane. The circumstances of Van Gogh’s life, and death, are treated as a mystery, one which is investigated by having Armand interviewing the people closest to him at the end. Each person interviewed gives their own take on the enigmatic subject, but Armand can’t make the pieces fit together into a whole picture. The truth Armand seeks is elusive, and all he has left is the truth revealed in Van Gogh’s paintings.

120 of those paintings are incorporated into Loving Vincent. Starry Night, The Night Cafe, The Red Vineyard, and Sorrowing Old Man are just a few that come to life during the film. Many of these are used in ways that are very close to the original, while others have been altered to fit the story better or are just in part.

The artwork on the animation is astounding. The vibrant colors of the paintings leap are vividly captured by the digital photography. The texture of the oils give each frame a tactile quality that draws the viewer in deeper. The time and place of Auvers-Sur-Oise in 1891 are brought to life in a manner that feels more real than a live-action film could achieve.

Flashbacks depicting past events as told to Armand are done in a contrasting style. Using a more photo-realistic style, and painted in black and white, they are meant to invoke photographs of the era. The animated transitions between past and present merge the two styles seamlessly.

Rotoscoping, a process by which actors are filmed, and then the footage is used as a reference for the animators, has been used in feature film animation since Disney’s Snow White. Done poorly, it can cause an odd ‘uncanny valley’ effect. Done well, it provides an animated work with a naturally fluid motion. It is done very well here. The actors’ performances come through in the animation- a must for story so reliant on conversation- and the animated characters are believably part of the world the film paints.

Armand finds himself seeking answers to the mystery that surrounds all great artists. What made Van Gogh Van Gogh? What was it about his life that compelled him to paint the way that he did? Van Gogh didn’t begin his career as an artist until he was 28, with no formal training. He was incredibly prolific, if not successful. By the time of his death, just 9 years later, he had completed 860 oil paintings and over a thousand drawings. That’s an extraordinary output for any artist. What drove him? Are there any answers that can be found; should we even be asking? In the end, all that remains are the works that stand the test of time and connect with us across centuries and continents. Isn’t that truth enough?