Roger Ebert once wrote that it’s not what a film is about, it’s how it’s about it. The Thomas Crown Affair is a movie about a heist and the pursuit of the mastermind behind it. How it’s about that is through lots of style and cool. It doesn’t have much more than that, but when your movie stars Steve McQueen and Faye Dunaway, well that may be all you need, baby.

The film opens with a crime. A half-dozen strangers pull off a daring daylight bank robbery, getting away with two million dollars.   After the driver, Erwin (Jack Weston), finally drops the bags off in a cemetery, they are retrieved, unseen, by the man behind the crime: Thomas Crown (McQueen). Crown is a rich investment banker who doesn’t need the money he just stole. What he needs is the thrill that comes from stealing it. 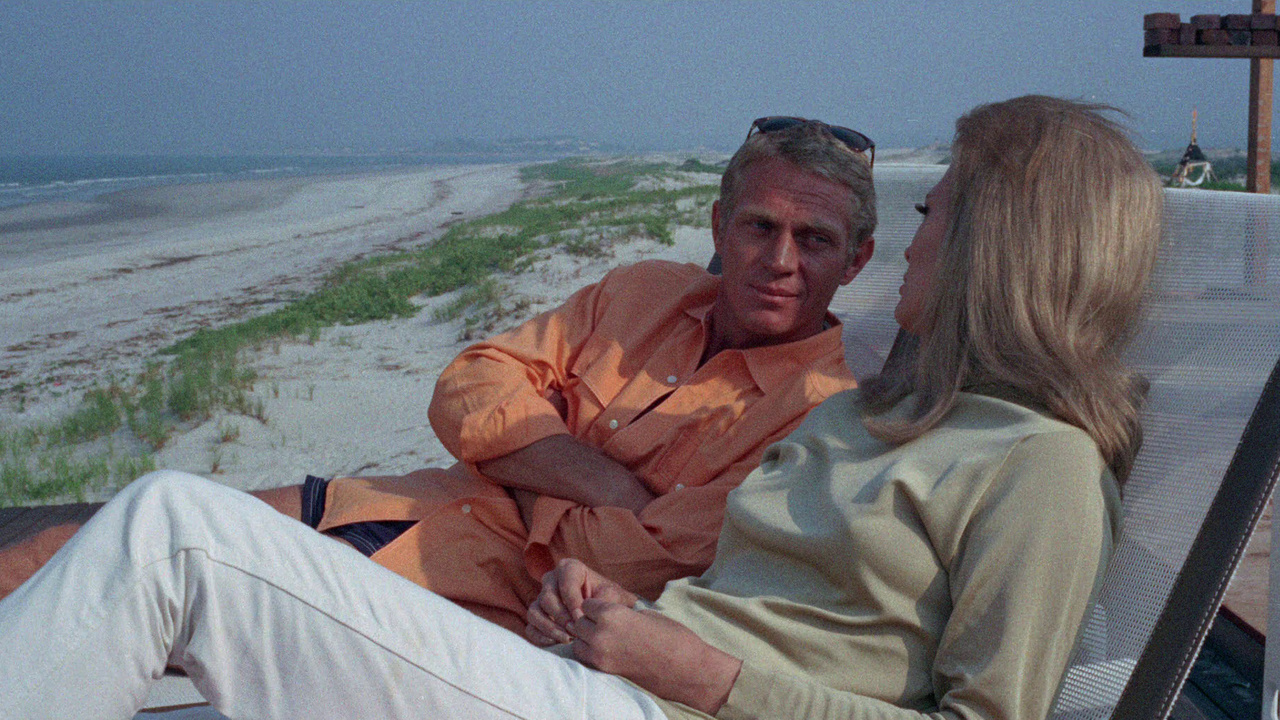 The folks he stole it from, however, want their money back. Once the insurance company pays out on the bank, they send in their own investigator to work with the police. This is Vicki Anderson (Dunaway). Anderson’s methods are unconventional, illegal and shady, but she quickly finds the loose thread that enables her to unwind the plot, and it leads her straight to Crown.

Anderson needs much more than what she’s actually got to take action against Crown, however, so she starts seeing him socially in order to get close to him. To her credit, she’s pretty open about her interest in him as a suspect in a major criminal case. This doesn’t deter Crown, he knows there’s nothing anyone can find to connect him to the robbery. Still, Anderson may prove to be the proverbial tiger that Crown has by the tail. The two of them are engaged in a chess match (literally as well, in one of the movies most famous, erotically-charged scenes) in which the stakes are their very hearts and souls.

What the movie is interested in is this relationship between Anderson and Crown, as the roles of hunter and hunted gradually flip

The Thomas Crown Affair may ostensibly be about an investigator’s pursuit of a criminal mastermind, but the movie seems largely uninterested in that particular plot. Anderson settles on Thomas Crown as her man less than halfway through the movie’s runtime, and nothing happens throughout the remainder of the movie to either dissuade or solidify her gut feeling on the matter. What the movie is interested in is this relationship between Anderson and Crown, as the roles of hunter and hunted gradually flip and Anderson begins to be as trapped by her feelings for Crown as he is by her investigation into him.

Crown, on the other hand, seems to welcome the challenge. The whole caper seems to have been born out of a need to break the boredom of his wealthy and successful life. He has everything he will ever need except a real struggle. Crown spends his weekend gliding, playing polo or racing his dune buggy, and while those activities each give him the rush he craves (his lover, played by Astrid Heeren, complains that he continually takes too many risks when flying) they don’t seem to scratch the itch as well as crime does. And even as the thrill of pulling off the perfect crime starts to fade, here comes Vicki with her bulldog-like persistence. Although it would be better for him to keep her at arms length, Crown can’t help but allow her to get close. 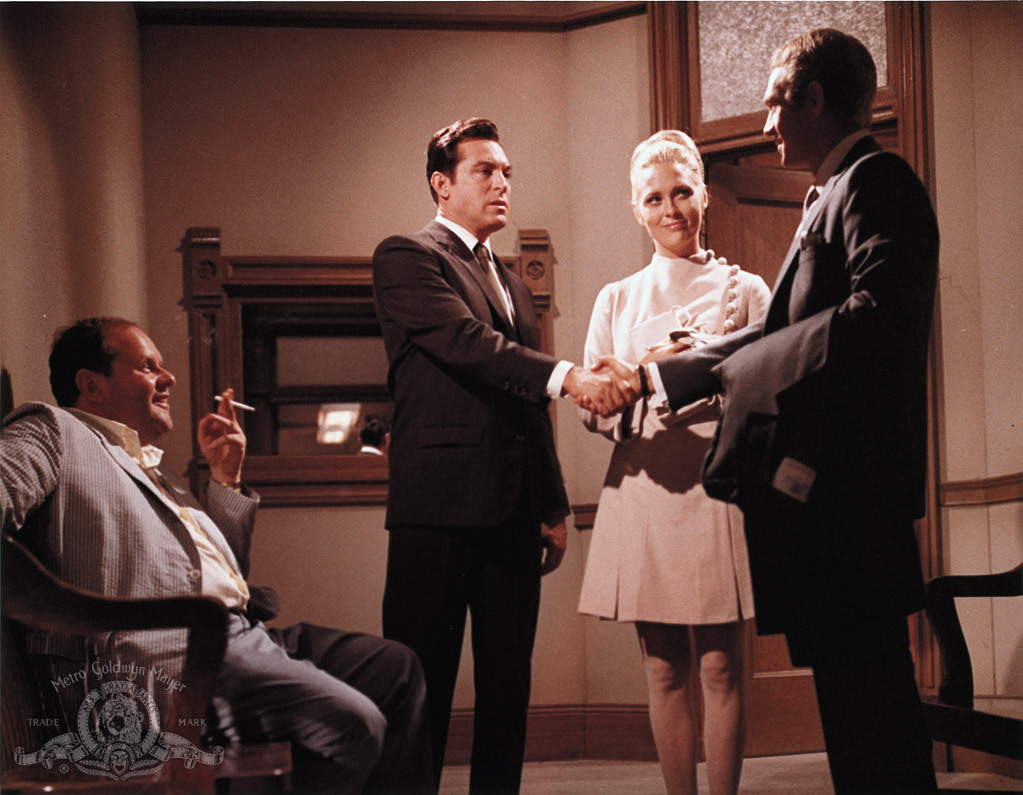 Steve McQueen has been dubbed “The King of Cool,” and this film certainly shows why he’s earned that… err… crown. His performance is almost entirely internalized. Aside from a moment where he allows himself to laugh out loud at what he managed to accomplish, Crown betrays very little outward signs of emotion. He’s the smartest guy in the room, and he’s satisfied if he’s the only one who knows it.  It’s not a bad performance- far from it. It’s just a very subtle one. The only time he (almost) loses his cool is during the aforementioned chess scene.  And believe me, the way Faye Dunaway plays chess- you’d have to be made of stone not to let that affect you.

With The Thomas Crown Affair, style is the name of the game.

In both his feature-length commentary that accompanies the movie on Kino Lorber’s Blu-Ray release and the 20-minute long interview also included on the disk, director Norman Jewison is the first to admit that the film is wholly about style over substance. That was by design and was Jewison’s intent from the beginning. He’s still very careful to let the style be dictated by the needs of the movie. The film’s ballyhooed split-screen sequences are used to compress the storytelling. The heist, for example, follows five total strangers as they make their way to the bank, plus Crown as he checks in with them and observes the proceedings from the vantage point of his office. Use of the split screen is showy, but it helps establish all of the moving parts leading up to the crime, without wasting an inordinate amount of screentime on characters we see once, then never again. A stylish choice used in the service of economical filmmaking. 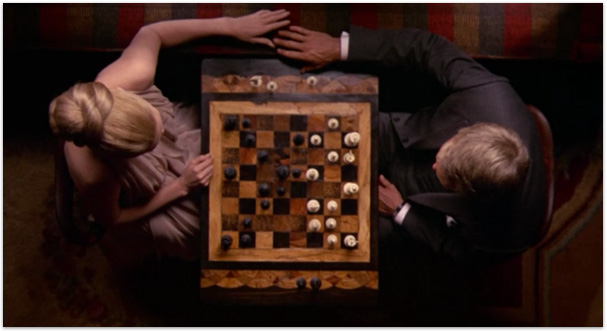 And with The Thomas Crown Affair, style is the name of the game. The main leads, the art direction, the costuming, the jazzy score all add up to a very stylish movie. The Thomas Crown Affair might’ve even seemed dated not long ago, but not anymore in our current post-Mad Men world. Its charms are easy to see and appreciate, but its filmmaking and craft go so much deeper than just its surface-level pleasures. This really is an Affair to remember.

Kino Lorber’s Blu-ray, released on the occasion of the film’s 50th anniversary, is packed full of extras. There’s the interview and commentary tracks with Jewison, as noted above, plus a short interview with the film’s title designer, Pablo Ferro. Ferro also was instrumental in designing the movie’s split-screen sequences. There’s an eight-minute long featurette from 1967 shot on the movie set, and a feature-length commentary from screenwriter Lem Dobbs and film historian Nick Redman. The original theatrical trailer for The Thomas Crown Affair as well as a handful of other movies from Norman Jewison are included as well.