A Bizarre and Expressive Story of Horror and Revenge

When we first see Dr. Z (Antonio Jiménez Escribano), he cuts a figure straight out of a James Bond movie. Sitting in his wheelchair, surrounded by his mad scientist lab equipment, he wears thick goggles and absentmindedly strokes a cat. How very odd then, that this strange figure should exit The Diabolical Dr. Z not long after.

You see, Dr. Z (his surname is Zimmer) believes that the human notions of morality are actually the result of chemical reactions in certain parts of the brain. He tells a panel of his neuroscientists peers that he has isolated the areas of the brain corresponding to both ‘good’ and ‘evil.’ Dr. Z claims to even be able to control them. When Dr. Z asks the panel of scientists for permission to pursue testing his theories on humans, he is shouted down so aggressively, that he has a heart attack and dies!

Before he can completely shuffle off this mortal coil, Dr. Z asks his daughter, Irma (Mabel Karr), to continue with his research. Devastated by her loss and hungry for revenge against the scientists who, she feels, killed her father, Irma obliges her father’s dying wish. The fact that her father’s work has given her the ability to control the minds of men, including a serial strangler and an exotic dancer named “Miss Death” (Estella Blain), probably helps in that decision. Before too long, Irma has faked her own death, set up a new lab in an abandoned house and has made a list of men she intends to see dead. 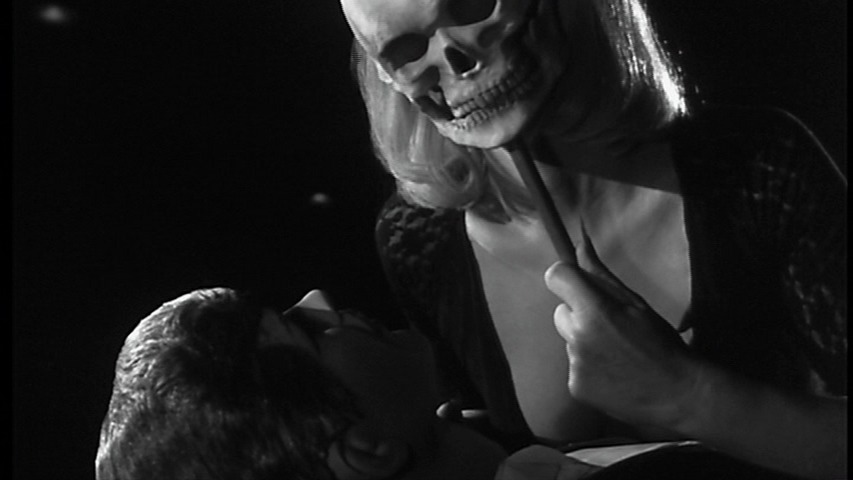 The Diabolical Dr. Z is a French/Spanish co-production from veteran director Jesus Franco, who was himself a Mexican/Cuban co-production from his parents. Franco started making horror movies when he and two of his producer friends watched the Hammer horror film The Brides of Dracula and decided they could make films in a similar… ah… vein. The result was The Awful Dr. Orloff, one of Spain’s earliest, if not the first, horror movie. Orloff was about a mad doctor who wants to repair his daughter’s disfigured face with skin grafts stolen from other women, sort of a loose remake of Eyes Without a Face. Franco followed Orloff with Dr. Z, and the eponymous Doctor even name checks Orloff as an influence on his own work, making this a quasi-sequel I suppose.

Orloff is referenced in another way as well: in a weird aside in Dr. Z, Irma’s face gets burned during one of her murders, and she has to perform plastic surgery on herself to restore her looks. This is surprisingly not a major element of the plot. After the surgery, which she recovers from in what must be just hours, she looks exactly the same as she did before, and continues on with her plan as if nothing happened. Major surgery on your own face is just another afternoon’s business for Dr. Z. 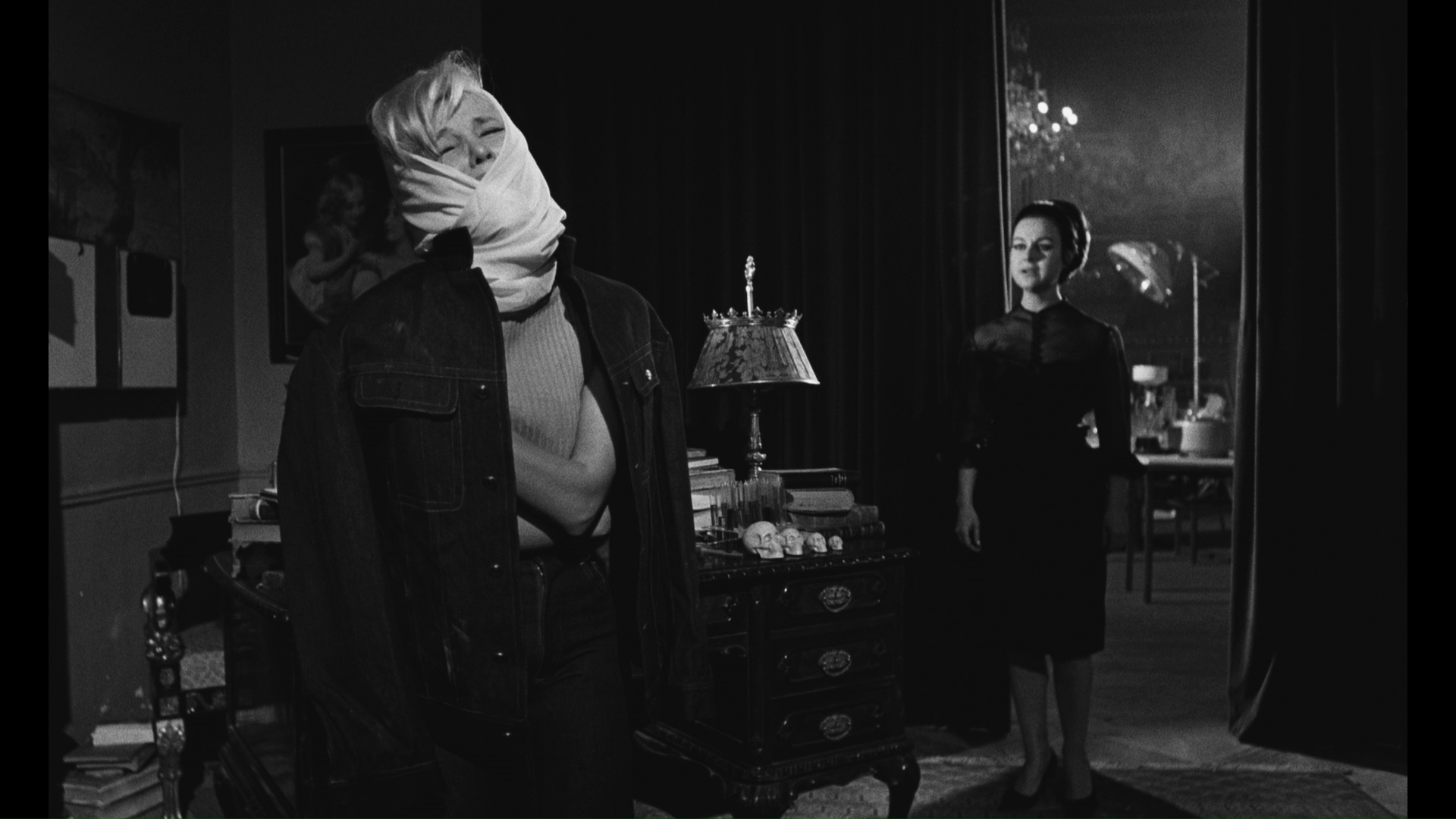 Dr. Z is a visually striking film that uses its black-and-white cinematography to its best advantage. Shots are evocatively composed and wonderfully staged. Though he is confined to a wheelchair, Dr. Zimmer is often shot from a low angle, granting him power and authority- up until the fateful panel where his position is challenged and his rivals tower over him. Wide-angle closeups and canted angles abound, generating an off-kilter feeling and creepy tension. In one sequence, Nadia, the exotic dancer whose talon-like fingernails have been laced with poison, confronts her victim on a train. As they converse, the train enters a tunnel and the lighting suddenly shifts from naturalistic to expressionistic. The victim remains shrouded in shadow, but a shaft of light illuminates Nadia’s eyes, giving the impression of a vampire taking over the will of its prey.

Dr. Z is a visually striking film that uses its black-and-white cinematography to its best advantage.

Unfortunately, Franco the writer doesn’t live up to Franco the director. Dr. Z’s screenplay, written by Franco and Jean-Claude Carriere goes down too many false paths in search of its final story. As mentioned, the mad Dr. Z is introduced, and we build up his work, then he dies. Irma attempts to get on with her life, then she gets all murdery. Irma’s boyfriend suddenly starts seeing Nadia, when did they meet? And so forth. The story relies heavily on coincidence, abrupt personality changes, and it climaxes in a sudden deus ex machina. I enjoyed the movie, but almost in spite of itself. 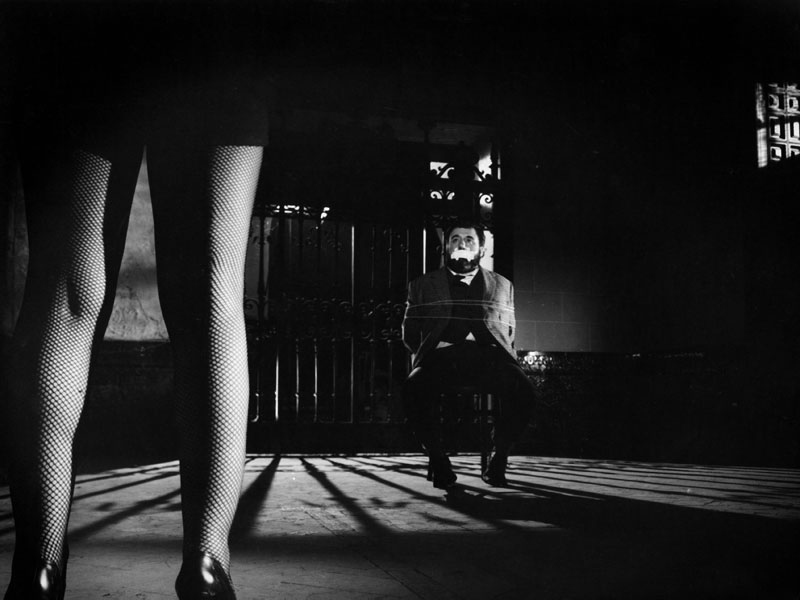 Still I have to admit that there are plenty of other elements that kept drawing me back in. The movie begins with a long POV shot of a killer escaping from what looks like a medieval dungeon. There’s a bizarre performance art piece that foreshadows another character’s eventual role later in the movie. The police officer who can’t sleep because his wife just had triplets was a fun character. And Dr. Z’s lab includes a bizarre contraption with robot arms that he, and later his daughter, use to trap and hold their victims. Dr. Z might be diabolical, but it isn’t horrible, awful or abominable.

Extras on the DVD include a feature length commentary by author Tim Lucas. Lucas gives biographical details on Franco and the film’s actors, pointing out their career highlights. He also discusses the making of Dr. Z, and its connections to Franco’s other films. The original theatrical trailer for The Diabolical Dr. Z is also included.  The image is in a 1.66:1 aspect ratio and a 1920x1080p resolution.