101 Imaginary Nights At The Movies

Fourth in a series of 101 imaginary movies, Cinema of Forgotten Dreams is my attempt to dramatize film history by creating and commenting on a repository of imaginative film viewing. From the earliest days of cinema to the era of blockbusters, my century (plus one) of Movies I Made Up will proceed chronologically through an alternate dimension of films. Will it be allowed? Will anyone read? Though I have no answer to either question, I’m doing it anyway: fortunately, there are no rules in the land of dreams.

Forging ahead to a new century, the medium that would record it introduced an element far removed from the camera’s continuing capture of fights, parades, and kisses. Furthering the appeal of early cinema, film began to provide elaborate context for those fights, parades, and kisses, and stories arose to provide those audience-involving possibilities. Film storytelling was still in its infancy, but ambitious filmmakers began to more fully realize the immediacy with which sequential imagery resonated with audiences; where a single performance could potentially reach more people with one recording than a thousand and one evenings of successful live shows.

While these five or six-minute screen passages were far from complex, and their presentation far from sophisticated, the anchored view of a stage proscenium put early cinema viewers directly in the place of an opening night audience. People who had never been to the theater, and who were seeing scenes from Shakespeare projected on the canvas folds of traveling tents or on the whitewashed walls of rural town halls for the first time, were nonetheless engrossed by images and sequences to which they had no previous exposure. Indistinguishable from the documentary views, or “actualities”, which earliest cinema had captured, the fixed camera view now took the place of an implied audience, and audiences responded to these images as if they were reality.

The fanciful, turn-of-the-century output of England’s Phantograph, a London-based film company that had splintered from the successful British Animatograph in 1900, offers an interesting screen view of the types of “reality” to which these early audiences enthusiastically whooped, hollered, and hoorayed – despite the normally sedate reputation of English spectators.

Specializing in fantasy improvisations, or a sort of Commedia dell’arte adapted for the pantomime stage, Phantograph grew out of the traveling stock of players and scenarists who had popularized the miming and acrobatic “Phantodrome” touring company in the last decade of the nineteenth century. Of the 90 fantasy short subjects produced by Phantograph, in the first decade of the twentieth century, only 1 now survives, but the self-proclaimed “Twelve Tableaux of Tomfoolery” provides not only an invaluable glimpse into a long-vanished storytelling world, but also the popular dreams and visions of a now forgotten audience.

“Tableaux 1: Cleaning Up!”
On a bright stage, its edges framed by twisting wood-carved ivy, the title character – patchsewn and ragworn Ashenpuddles – toils with a bucket and mop across its dust-mounded surface. Each dancing sweep up and down its length reveals the glittering reflection of the arc lights above in the contours below.

“Tableaux 2: Frolic of a Fall!”
Ashenpuddles pauses to survey her good work, saluting her second self in the now mirrored surface beneath her feet with a hard-earned forearm wiped across her brow. Placing her arm back to her side, Ashenpuddles in reflection remains curiously frozen in salute. Long-tattered skirts splayed across the stage, Ashenpuddles above collapses to her backside in surprise at the lack of response from Ashenpuddles below.

“Tableaux 3: Topsy Turvy!”
The reflection in the still-glittering world below remains standing even as Ashenpuddles above struggles to her feet. Peering up and peering down, the two Ashenpuddles bend curiously towards their other self.

“Tableaux 5: Mirrored Maids!”
Ashenpuddles above and Ashenpuddles below pause in their mutual motion reverie. One opens her mouth while the other bends to hear. The process repeats, in reverse. The Ashenpuddles nod their heads simultaneously in agreement.

“Tableaux 6: Worlds in Reverse!”
Without either Ashenpuddles moving, the bare stage and its carved-ivy proscenium remains, as does the starry pattern of arc lights above and below, but an imperceptible shift in the image now occurs, which cannot be seen but only felt. With a quick leap, the Ashenpuddles separate mid-air and land upon the other’s image.

“Tableaux 7: The Dance Continues!”
The image now the reflection, and vice versa, Ashenpuddles continues to cavort, caper, and generally gambol about her upside-down or perhaps right-side-up world. As in a mirror, Ashenpuddles’ dance continues to erase the illusion between image and reflection with each lightly-treaded step.

“Tableaux 8: The Lights Dim!”
One by one, the arc lights above and below flicker and fade in simultaneous reflection. Darkness stretches from one corner of the stage to its center, where Ashenpuddles, head-to-toe and toe-to-head, stands trembling in doubled fear.

“Tableaux 9: Drifting Smoke!”
One spotlight remains overhead and underfeet, at which Ashenpuddles above and below peer up and down, and then, glancing at each other, nod in agreement to stay put, lest one, the other, or both should otherwise disappear. As if in answer to the unspoken question, however, great billowing clouds of smoke – possibly mirroring each other horizontally as Ashenpuddles is mirrored vertically – suddenly drift from either end of the stage.

“Tableaux 10: Disappearing Damsels!”
The dust drifts rapidly over the length of the stage, obscuring the reflected world below. The mirrored Ashenpuddles vanish from view as the smoke clouds meet in the exact center of the stage.

Tableaux 11: The Ragamuffin Reappears!”
But as the plucky Ashenpuddles pokes her head from the dust pile, the offstage windrifts cease and the arc lights overhead flood the proscenium view once more. Now reduced to one, her reflected world gone, the ever-inventive Ashenpuddles nonetheless raises a canny finger to her temple, smiles, and taps twice.

And with that final intertitle, the six-and-a-half minute, approximately one-thousand feet of 35mm film presumably loops back to its first tableaux, replicating in perpetuity the mirrored plight of Ashenpuddles and her stage-world of illusions.

As an historical footnote, the sole surviving output of British Phantograph received a Royal Command performance for the recently acceded King Edward VII on December 31st, 1901 before an assemblage of lords, ladies, members of Parliament, and wealthy industrialists, with a retinue of footmen, parlor maids, housekeepers, and butlers standing in attendance. 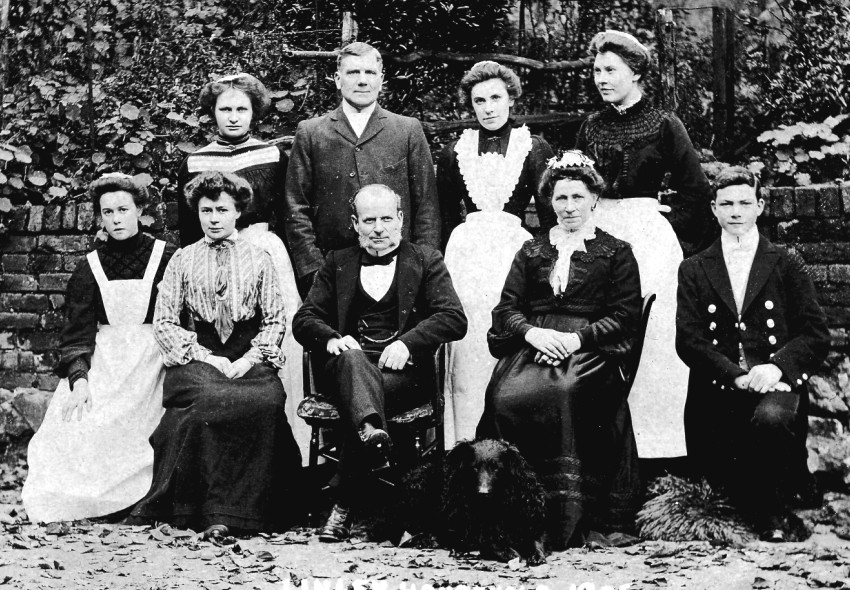 Whether a domestic homily on keeping house, a literal reflection on the reflected nature of being, a vast allegory on the rise and fall and fall and rise of great civilizations, or none of these, it is comforting to think that both Edward the 60-year-old monarch in his ceremonial robes and Edward the 17-year-old bootblack in his threadbare livery shook, tittered, and guffawed along to the same projected images.