MURDER ON THE ORIENT EXPRESS – AFTER THE SHOW

“After the Show” is our spoiler-friendly way of talking about movies at ZekeFilm.  In this article, plot twists and hidden details of MURDER ON THE ORIENT EXPRESS are potentially discussed.

Kenneth Branagh has become the latest to adapt Agatha Christie’s Murder on the Orient Express. It’s a classic whodunnit murder mystery in which a shady American businessman (Johnny Depp) is killed, and the murderer can only be one of 13 possible suspects trapped on a snowbound train. The novel has been adapted several times already for film and TV, most notably by Sydney Lumet in 1974, and the book itself has been in print continuously since its initial publication in 1934. There’s an above-average chance you already know the solution to the mystery. Still, this is the obligatory spoiler warning.

Early reviews of the movie have noted that Murder wastes a fantastic cast. There’s some merit to that charge. Casting the likes of Willem Dafoe, Michelle Pfeiffer, Derek Jacobi, Penelope Cruz, and Judi Dench and then not giving them any opportunity to play off each other is a little frustrating, but Murder isn’t as interested in its ensemble of suspects as much as it is interested in its lead detective. The movie is laser-focused on Branagh’s Poirot. Is that simply vanity on the director’s part? Maybe, but by concentrating its attention on Poirot almost exclusively, the movie becomes less about the crime, and how it is solved, and more about the man solving it. Put simply, Murder on the Orient Express is a story about someone who discovers that, despite his reputation and considerable self-confidence, he does not possess all of the answers.

Poirot’s Manichean world view is well established at the beginning of the movie. “There is good and there is evil,” Poirot tells another character early on, “And there is nothing in between.” The rest of the movie will work hard to push against that view. A murder has been committed, pre-meditated and against a drugged and helpless victim, and even though Poirot instantly took a personal dislike to the victim, Mr. Ratchett, he cannot allow the murderer to escape justice. However, as he investigates, the case becomes less clear. Ratchett wasn’t an innocent. He was a kidnapper and a murderer himself who escaped justice for his crimes in America, crimes which destroyed the lives of everyone they touched.

The dramatic climax of the film is not whether or not Poirot will solve the case. As he would be the first to tell you, he is the world’s greatest detective- of course he will figure it out. The real question is whether or not he will let the passengers go. He cannot abide murder he says, but can he soften his stance when the victim is an unrepentant child murderer for whom no justice awaits? And if Poirot can let them go, what does that do to his sense of who he is?

Poirot’s good and evil world view is thusly broken. Throughout the movie, the theme of breaking or coming apart keeps reoccurring. Poirot is going to ‘break’ the case open. He talks of murder ‘fracturing’ souls. The glass on Poirot’s portrait breaks when the train crashes to a stop. Characters are often filmed through beveled glass, breaking their image up into two or three pieces, and all of them have multiple levels of identity. Dafoe’s Austrian professor, to choose just one example, is actually a Pinkerton detective, who’s actually an ex-cop, who’s actually the lover of the woman who killed herself when she was falsely accused of Ratchett’s crimes. He also a lawman, who must go outside of the law and commit a murder because the American legal system had broken down and let a guilty man go free. 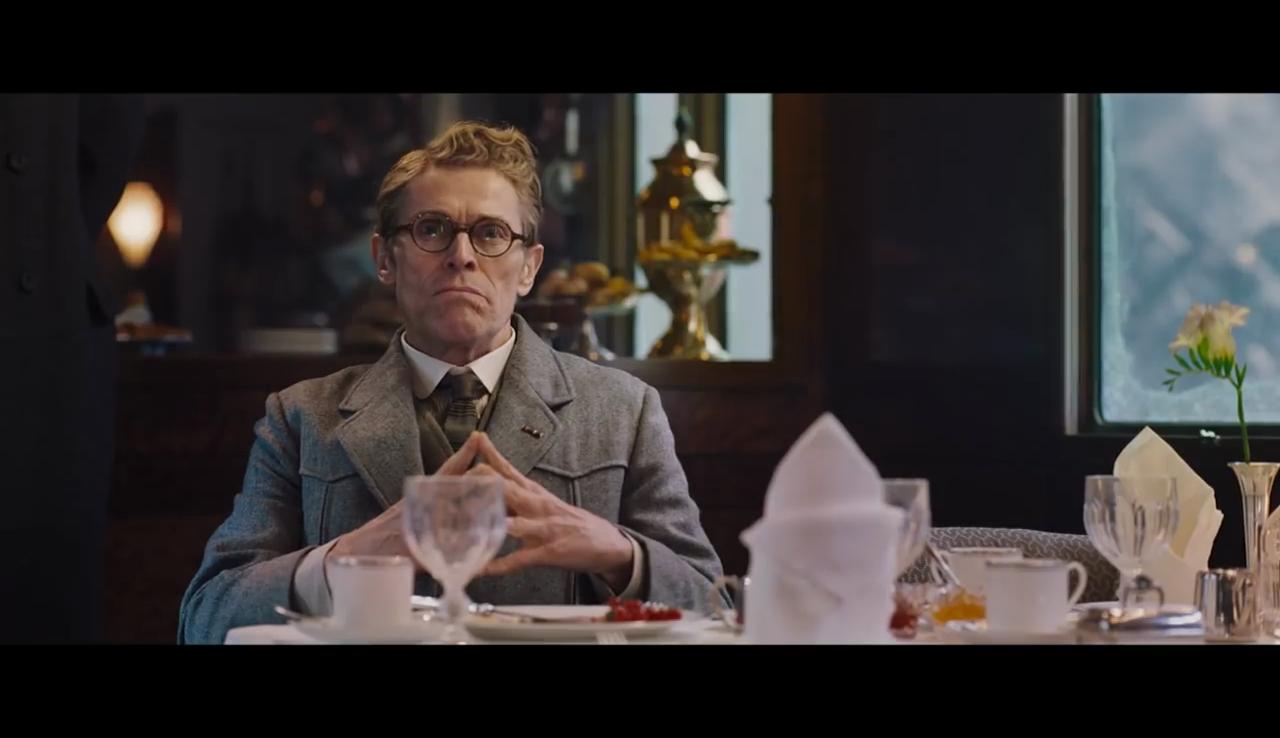 The charge of duplicity applies to Poirot as well. In the novels, the character confesses to playing up his broken English (he actually speaks it fluently) and his dandy appearance in order to allow others to underestimate him. He plays the caring father figure sort when interviewing young women to put them at their ease in hopes they will confess more to him than they otherwise might. M. Bouc may in fact be the only completely honest person on that train, who confesses to his proclivities, his prostitutes and his laziness cheerfully when asked.

Poirot is himself a man with a broken heart. There was some unexplained tragedy in the past from which he has not yet fully recovered.  The movie never goes into detail about it- and I don’t believe Christie’s novels ever allude to it. It is another aspect of his identity that he hides, that keeps him separated from other people.

How the passengers- including the doctor, the nurse, the policeman- feel about their decision to help murder a man is left unanswered, but Poirot makes his choice to conceal the true nature of the crime from the authorities. They will buy his story because it comes from a man they believe to be honest. His decision weighs on him, but there isn’t any time for him to dwell on it. The end of the movie has Poirot receiving a telegram about a death… on the Nile. In James Bond-like style, he heads off into another mystery.